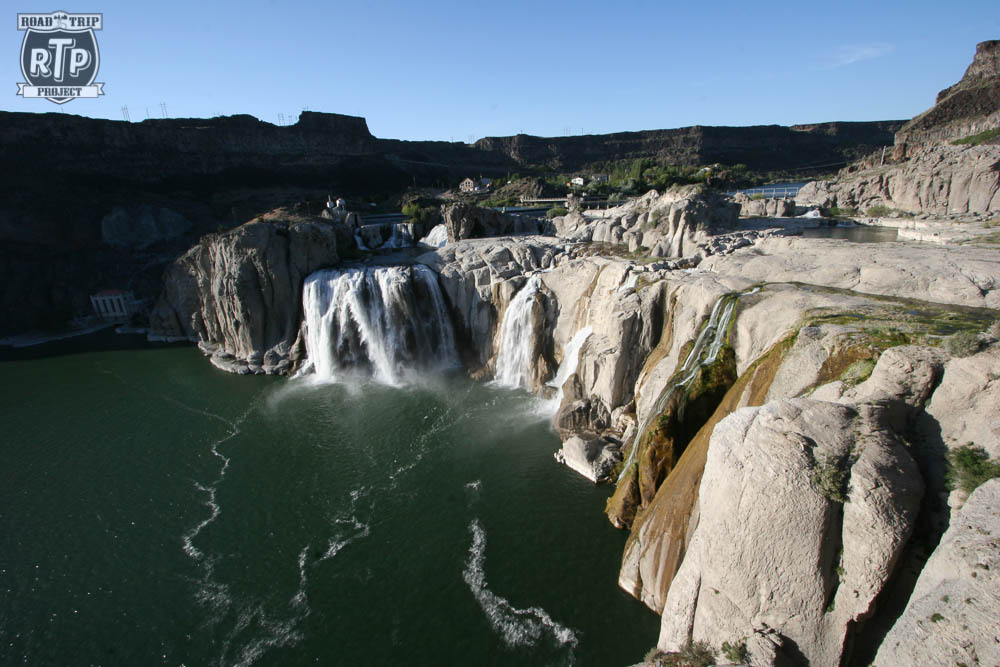 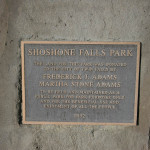 A plaque at Shoshone 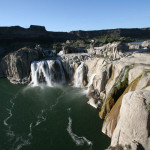 Shoshone Falls. They call it the Niagra of the West. 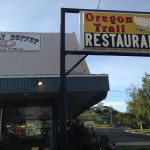 Breakfast on the Oregon Trail. 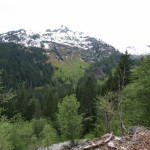 Mt. Rainier from a distance.

Looking down into a canyon on the way up Rainier.

Me driving the van up Mt. Rainier. 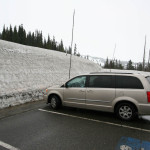 This is May 25th at Rainier. It was fairly warm and raining. 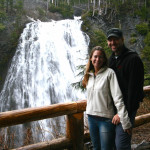 Us in front of Narada Falls. 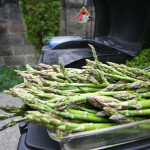 Gerri’s parents and mine meet for the first time. 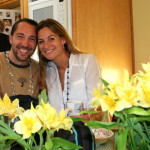 Gerri and I at her grandma’s Memorial Day BBQ.

After unloading all of our stuff at the new house we had our first visitors!  Friday morning my Dad and Step-Mom came over with my niece and her fiancé.  We showed them around the house and then went out for lunch since we have no food and no dishes.  It was fun to have them over though.

The next morning we hit the road for the 1400 mile journey to Seattle.  We tried to get an early start but even by 7:30am there was a ton of traffic because it was Memorial Day weekend.  It cleared up on the north end of Denver and we were on our way.  Things were going swimmingly until just outside of Laramie, WY.  We were on a two lane highway in the country and ahead was a state trooper pulled off to the side with another vehicle.  As we passed I moved over to the left as much as I could but there wasn’t a ton of room to maneuver.  I glanced in my rear view to find the trooper had pulled up right behind me, quite quickly I might add.  Well, as you may have guessed he was pulling me over, although I wasn’t quite sure what for.  I soon found out that it is a Wyoming State Law that you slow to 20mph below the posted speed limit while passing an emergency vehicle on a two lane highway.  I was unaware of this but apparently my ignorance of the law didn’t buy me any leeway and he handed me a citation.  I was a little frustrated with the situation but apparently Gerri found it quite humorous as she noted the occasion in our journal accompanied by a smiley face.  I was none too pleased with this discovery either.  Oh well.  C’est la vie.  The rest of the day we spent looking at cows, sheep, pronghorns and rolling hills as we covered all of southern Wyoming, Utah and Idaho.  About 130 miles from Boise, ID we ran across a sign for “scenic waterfalls” and decided to go check it out.  We went from rolling hills of farmland to a massive canyon containing the Snake River and a massive waterfall called Shoshone Falls.  I’ve never heard of this in my life but apparently they call it the Niagra of the West.  It’s taller than Niagra falls and quite impressive.  In 1974 Evel Knievel attempted to jump the 3/4 of a mile across the Snake River Canyon just downstream from the falls.  He failed miserably when his parachute opened on the take-off ramp and sent him plummeting to the bottom of the canyon.  Fortunately he landed on the bank of the river and didn’t drown.  Anyway, it was a pretty solid little find.  We took a few pics and continued on our journey.  The next stop was Boise where we planned on staying for the night but we needed to get some dinner first.  We found a place called Tilted Kilt and thought that looked cool.  Plus we had seen it on Undercover Boss.  It turned out to be a really cool spot and our bartender Jason was awesome.  After dinner we set out to find a place to sleep.  We planned on sleeping in the back of the van but needed to find something that was dark and quiet.  We drove another 50 miles or so to the Oregon border and parked at a rest stop for the evening.  It felt good to cross into that second to last state.

The next morning we woke up well rested and refreshed.  The sunrise was beautiful and we were especially stoked that we didn’t spend any money on camping or a hotel.  It was only 490 miles to our destination and we were getting an early start so that would allow for some sight-seeing today!  Our first stop was for breakfast.  We found this old little historic town called Baker and a restaurant called the Oregon Trail.  They served breakfast with a side of sass at an old wood veneered bar surrounded by hunting and fishing trophies.  Between the napkins and the salt were books about “How to Survive Around Idiots” and “A Guide to Understanding Women”.  Aside from taking a picture of Gerri at the breakfast counter we didn’t touch our phones and just giggled at the ludicrous guides as we ate pancakes and eggs.  When it came time to go we had to waddle to our car due to overconsumption of syrup and whipped butter.  The road was again filled with sights of rolling hills and cows.  We did get into wine country in northern Oregon and heading into southern Washington.  The next cool scenery came in Yakima where we passed fruit stand after fruit stand selling Rainier Cherries and apples.  We had to stop and get some.  Then it was on to explore Mt. Rainier.  The weather wasn’t ideal and the summit was hidden in the clouds.  On the way up it started to rain but it was still quite a spectacular sight!  Gerri kept getting annoyed with me because I wanted to stop every 100 yards to take pictures but since she grew up around here she knew the best was yet to come.  I tried to control myself but there were so many scenic vistas.  We drove to the visitor center and then on the way down we stopped once more at Narada Falls.  That was totally worth the little hike down a snow covered trail for the pic.  I really could have spent a ton more time there but we had an appointment to make.  Our parents were meeting for the first time at 6pm and we needed to be at the restaurant in pretty short order.  We drove off the mountain and straight to dinner.  We arrived at our final destination on the West Coast safe, sound and on time for dinner!  Now for a few days of family fun and cleaning out a storage unit and we’ll be back on the road this weekend.

2 Comments on “Denver to Seattle”